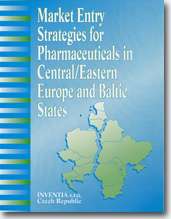 The pharmaceutical markets in Central and Eastern Europe and the Baltic States have experienced dramatic growth since the breakup of the former Soviet Union. As these economies convert to market-based systems, numerous strategic alliance opportunities for foreign firms are being created.

Inventia s.r.o.* has evaluated the pharmaceutical business and strategic alliance opportunities in each of 12 countries in the region. These countries include: Poland, Czech Republic, Hungary, Slovakia, Croatia, Slovenia, Romania, Ukraine, Bulgaria, Latvia, Lithuania, and Estonia. The results of this effort are presented in a multiple-subscriber study, Market Entry Strategies for Pharmaceuticals in Central/Eastern Europe and Baltic States.

There are numerous strategies for market entry in Central and Eastern Europe and the Baltic States. The form of these entry strategies will vary from country to country depending on such issues as:

Specific strategies with wholesalers and manufacturers, licensing opportunities, and possibilities for R&D collaborations are included in this report.

*Inventia s.r.o. is affialiated with Technology Catalysts International Corporation of the United States and its associated companies around the world.

View all Multi-Client Reports Next