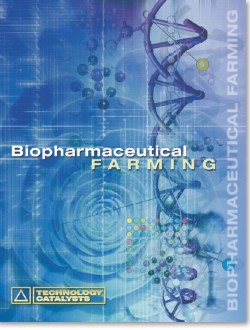 Using plants to produce biopharmaceuticals is being touted as the next generation manufacturing process for monoclonal antibodies and recombinant proteins. Growing biopharmaceuticals in plants is expected to help solve some of the current production problems facing developers. However, as with most new technologies, there are many issues that need to be addressed as well.

Plant-based biopharmaceutical manufacturing has the potential to produce large quantities of recombinant proteins or monoclonal antibodies at a lower cost than traditional mammalian cell culture. The use of plants can also avoid transmitting animal diseases by eliminating the need to extract the drugs from animals or to use animal proteins in cell culture. Also it is envisioned that it will be quicker and less expensive to scale-up (increase acreage) of a plant-based system than to build a sterile biological manufacturing facility.

However, the use of plants and especially crop plants raises concerns about maintaining the safety of the food supply. Gene flow through pollen drift from the altered plants to plants intended for the food market is one potential transfer mechanism. Unintentional mixing during harvesting, processing and transport is also of concern. While the proteins may be harmless if accidentally ingested, there is a major concern surrounding public reaction if contamination occurs. In addition to the safety of the human food supply, there are the possible ecological effects on animals and insects that may ingest the plants producing these proteins.